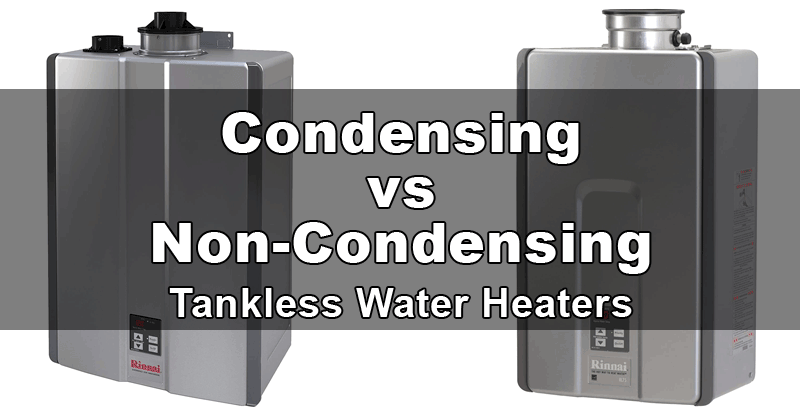 Tankless water heaters outperform traditional tank models in many respects. They require less maintenance, have an essentially unlimited hot water capacity, and account for a much smaller percentage of your utility bills. They also require fare less space, which can make a big difference in a small garage.

There are two major flavors of gas-fueled tankless water heater: condensing and non-condensing. Each has their own advantages and disadvantages to consider.

Let’s take a look at the condensing vs non-condensing tankless water heater debate to see how they work and how they compare to each other.

How Water is Heated in a Tankless Water Heater

When you turn on your hot water tap, it begins to pull water through the intake pipe. A flow sensor in this pipe then signals the control panel to begin the heating process.

The exhaust fan is activated, then the gas valve is opened and the burner is ignited. The primary heat exchanger pulls heat from the flame and transfers it to the cold water flowing through the system’s tubing.

A mixing valve (see also ‘Hot Water Mixing Valve Buying & Installation Tips‘) can help prevent the superheated water from being too hot by adding a little cold as it leaves the exchange chamber. Just beyond it is a temperature sensor which compares the water to your preferred temperature settings.

Any variation results in a signal being sent that adjusts the valves, including a flow-regulating valve, to bring the exiting water to the proper temperature. Finally, the exhaust is pulled through one or two sealed vents and vented safely outside your home.

Note that there’s a slight variation to this process, depending upon the system you’re using, but the overall process is the same for all gas models. 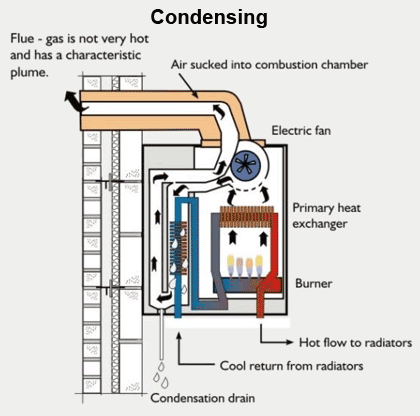 Have you ever stopped to think about how wasteful an open system can be? Closed systems recycle materials, but in an open system, something’s always lost in the process.

Condensing water heaters address this common flaw by using the exhaust gas to further heat water instead of letting all that warm (but not exactly breathable) hot air escape scot free.

Condensing systems have a second heat exchanger and are designed to loop exhaust back through the system before releasing it. These gasses aren’t especially hot (usually around 100 degrees), but as they pass through the secondary exchanger, some of their heat is transferred to incoming cold water.

The water then passes through to the main heat exchanger where it achieves the desired temperature using far less energy.

A nice little side effect of recycling the exhaust is that it causes vapor to form, which then cools and condenses to be recycled back into your water supply. This can help a little with your water bill, but also proves to be this system’s weakness.

The act of reusing the exhaust doesn’t just save on fuel and heating costs. Exhaust from a gas system can reach as high as 300 degrees, requiring special materials in the flu system. As a result, a large portion of your investment tends to be tied up in the water heater’s ventilation system.

Condensing water heaters pull heat from the exhaust, cooling it to much lower temperatures. This means cheaper materials can be used for the ventilation system. Overall efficiency in a condensing model is approximately 90 percent, which makes them one of the most efficient choices you can make.

Corrosion is one of the biggest concerns with a condensing tankless water heater (see also ‘ Water Heater Hissing? Do This Immediately! ‘). The act of condensation results in several components having a shorter lifespan. To counteract this, stainless steel alloys are generally the best choice when choosing a condensing water heater. 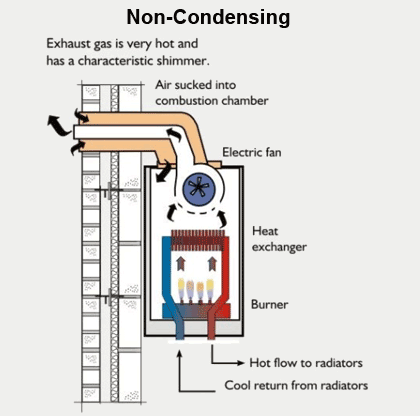 The vast majority of gas powered tankless water heaters are non-condensing models. These systems are often the first type people choose when converting from a traditional tank model to take advantage of existing ventilation.

Non-condensing models are the more basic form of gas powered tankless water heater (see also ‘ Operating A Tankless Gas Water Heater Without Electricity ‘). As such, they have only one heat exchanger. The exhaust gasses are a much higher temperature as they leave the unit and are vented directly instead of being looped back through the heater.

When converting from a traditional tank model, you can often make use of existing fixtures. This means spending less on a flu system, which can be the most expensive part of most water heater (see also ‘4500 Vs 5500 Watt Water Heater‘) systems.

In addition, non-condensing models are cheaper than their condensing kin, making that initial price tag quite attractive when upgrading to a tankless water heater (see also ‘Why Using A Tankless Water Heater For Radiant Floor Heating Is A Good Idea‘).

Two other nice factors is their slightly smaller size and the fact that you only need to worry about professional maintenance, whereas other models tend to require both DIY and professional attention.

The exhaust coming from a tankless model is superheated and can thus decimate the vents unless a durable, more costly material such as stainless steel is used. This means a much higher investment if your current water heater’s flu system is older or made of less durable materials.

Additionally, the efficiency is only about 80 percent for these models. While this is certainly higher than a lot of tank models out there, it does leave plenty of room for improvement if operational costs are your biggest concern. 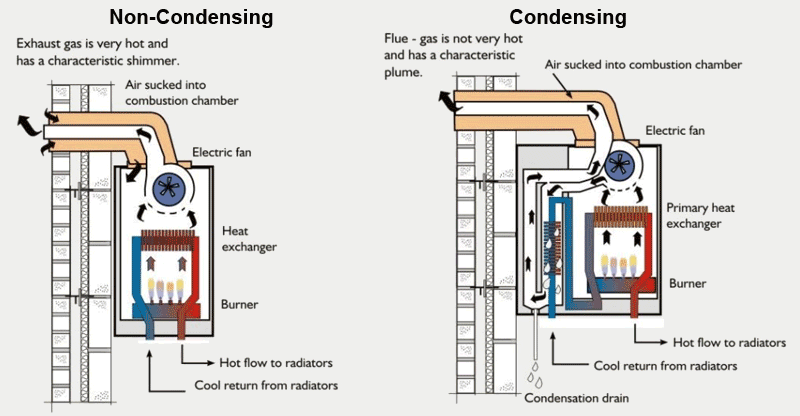 Now that we’ve had a look at these two types and their individual features, it’s time to make a comparison in the condensing vs non-condensing tankless water heater (see also ‘Tankless Water Heater Vs. Tank‘) debate. The following are several key categories where the two systems differ.

We can’t tell you which one to go with because everyone’s needs are a little different, although we personally lean a little towards the condensing side as the technology is currently slightly ahead of other types.

When efficiency is key, the condensing models outperform their kin, coming in at 90 percent efficiency compared to the 80 percent of non-condensing tankless water heaters. Both choices are more efficient than electric models.

Both systems release negligible amounts of toxic vapors into the air, which is a downside to using natural gas. However, condensing units definitely create a lower carbon footprint than any other tankless water heater option currently out there.

Condensing models tend to be more expensive than non-condensing due to the extra heat exchanger. The extra components may also result in some additional maintenance over the years.

While this balances out in terms of long-term utility savings, the initial investment may be a put-off to some individuals on a tight budget. In the shorter range, non-condensing units are cheaper.

The lifespan of a gas-powered tankless water heater (see also ‘Wood Burning Water Heaters’) can easily surpass 20 years when properly maintained. Both condensing and non-condensing models have components that will wear out a little quicker than in the other.

In the case of condensing systems, the pipes which handle condensation must be made of a high-grade, corrosion-resistant material. These may degrade over time and need replaced. Non-condensing models have much higher temperatures passing through their exhaust ventilation, which can cause degradation or leaks over time.

Condensing models save more money by recycling its byproducts to produce extra heat. Depending on how you have the condensation line connected, this byproduct can also be recycled back into your water lines, slightly reducing your water bills.