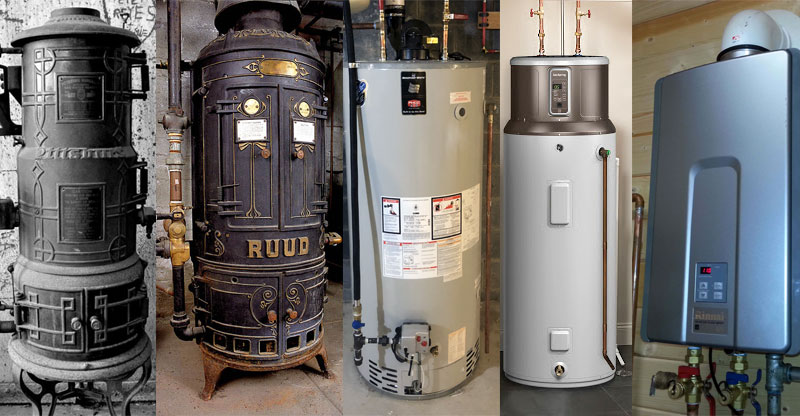 One of the most important appliances in your home is also one of ones most taken for granted. However, while water heaters are considered an essential part of modern households in the US, a lot of homes worldwide still use much older technology.

But when was the water heater invented and how has it evolved? Let’s take a moment to look back on the history of water heaters and what made them the essential feature they are today.

From ancient times through the steam age, a family’s best friend was the fireplace or stove. Water was heated to scalding or even boiling, then transported by hand to bathtubs where it was carefully poured in until the bath was a comfortable temperature.

Some locations had the benefit of hot springs, where bath houses were built to allow communal use of the naturally hot water. The Romans used a form of primitive furnace to heat their public baths, but relied on the pitcher method for home use.

By the advent of the steam age, boilers had become an important part of life. Better known for their use in locomotives and various ships such as the Titanic, boilers became a viable heat source in homes and are still used instead of furnaces in some homes.

This method of heating worked well in a closed system, but was too inefficient for heating water for household use, leaving an almost unexplored industry.

The Debate Over Who Invented the Water Heater

In 1868, Benjamin Waddy Maughan patented a device to heat water. While the painter may be accredited with the first patented residential water heater, the design lacked a flue. As this heater relied on natural gas, this oversight made it too dangerous to use as intended.

Another innovator, Edwin Ruud, saw the design 21 years later and created an updated model while working for George Westinghouse in Pittsburgh. This new model had many safety features added and is generally considered the first true home water heater.

Rudd bought the rights to his invention and formed his own company in 1897. Today, Ruud remains a respected name in water heating and is a subsidiary of Rheem.

Postwar and the Electric Alternative

A large number of water heater companies sprang up during the Industrial Revolution and thrived even after the Great Depression hit. However, the industry hit a screeching halt after the bombing of Pearl Harbor.

At this point, companies either re-purposed their factories to aid in the war effort or began producing boilers for use in naval vessels.

When the war ended, business went back to usual – almost. A few new companies sprang up to create even more competition in the Postwar era. One of these, State Water Heaters, opened its doors in 1946 as a stove company but joined a new area of electric water heaters in 1948.

Thanks to the WPA during the depression and a much lower production cost for electric water heaters, the demand for this alternative to gas quickly increased. State and other companies took advantage of this demand, leading them to become some of the largest companies in the world to this day. 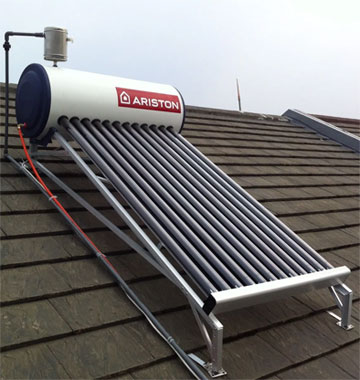 Quite a few innovations came in the decades following the emergence of electric water heaters (see also ‘ Can You Transport A Water Heater In A Car? ‘), but the competition wouldn’t remain two-sided. An old rival, solar water heating, would return to provide a worthy opponent in a time of increasing environmental awareness.

The first patented commercial solar water heater appeared way back in 1891 and equipped homes slowly spread from California to Florida. This process was halted due to copper shortages during WWII.

Federal tax credits created in the early 1980s saw a brief surge in renewable energy technology until the credits ended in 1986. Despite many companies giving up, solar technology began gaining more momentum in the ‘90s and today once again stands tall with Federal and state incentives, as well as a wide range of advances in efficiency and reliability.

But the return of solar also heralded the return of another environmentally-efficient competitor. The first official electric tankless model was invented back in 1929 by Stiebel-Elton. These water heaters were less popular than gas heaters and remained a silent alternative for decades until the technology began to catch up in efficiency.

By the 1990s, tankless water heaters became a viable alternative for those who wished to save on bills. The new interest led to a series of innovations which make tankless models among the most versatile and cost-efficient sources of hot water today.

Between solar, tankless, and new hybrid models, it seems more and more likely that traditional gas and electric models will slowly fade into obscurity. However, they’ve had more than a century of almost continuous evolution, so that A.O. Smith in your basement will likely not be replaced by these alternatives in the near future.