Should PEX Piping Be Insulated? 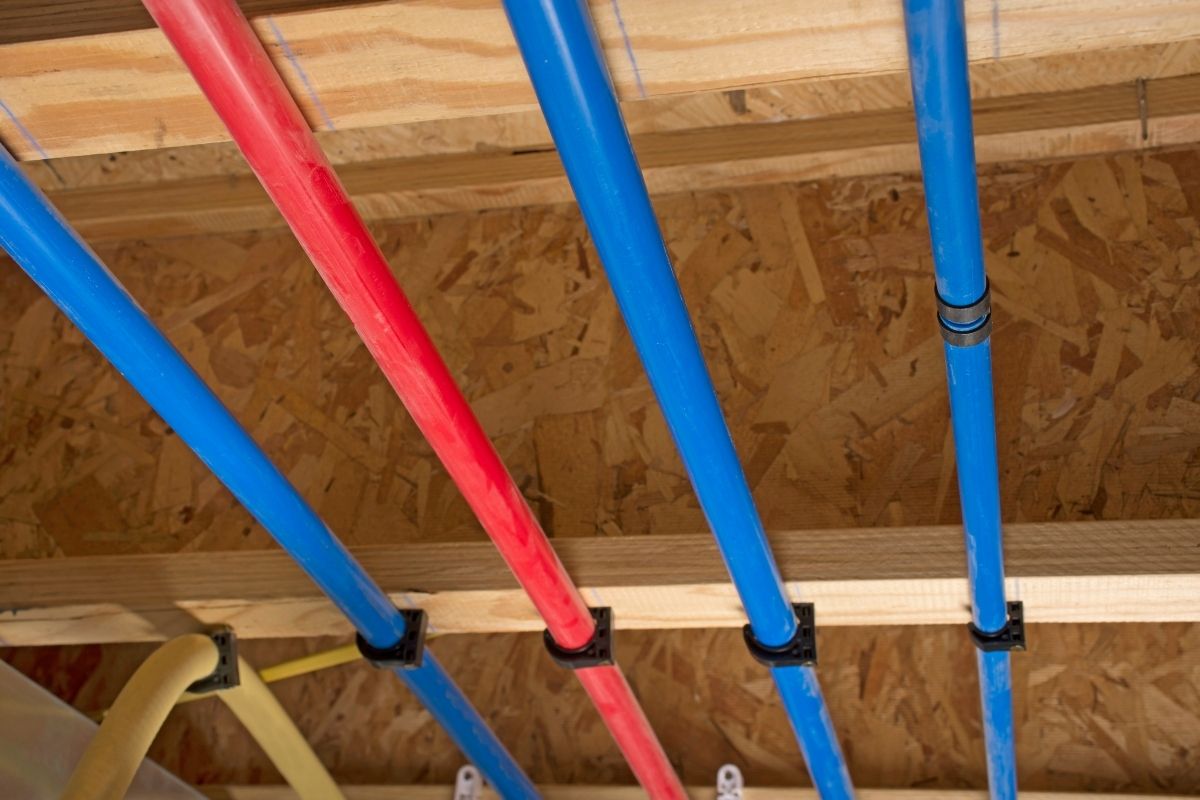 PEX has become the standard material for water supply systems because it’s cheap and easy to install.

However, PEX piping isn’t always suitable for every application. In some situations, it might be better to use copper or other materials.

If you’re considering using PEX in your home, you should consider these pros and cons before starting the project.

It’s also used in residential plumbing projects. However, it’s important to choose the right type of PEX for each job.

Here are some things to consider when choosing between PEX and copper pipes.

One benefit of PEX piping is that it can bend easily without breaking.

This means that it’s a good choice for projects where flexibility matters.

For example, if you need to route a pipe through an area with limited space, you could use polyethylene instead of copper.

The durability of PEX is another reason why it’s popular among plumbers.

Because it’s made from plastic, it won’t corrode as metal does.

In light of this, it tends to last a lot longer and requires less maintenance.

Another advantage of PEX over copper is its resistance to corrosion (see also ‘Copper Corrosion: Everything You Need to Know’).

Unlike copper, which will rust after exposure to air, PEX doesn’t oxidize. This makes it ideal for areas where there’s a lot of moisture.

Because PEX is non-corroding, it’s easier to maintain than copper.

You don’t have to worry about cleaning out clogs or replacing old fittings. The only thing you need to do is to regularly check the joints for leaks.

Because PEX piping is so versatile, it’s easy to install. It’s usually cheaper than copper piping, too.

Since it’s flexible and lightweight, you can cut it into any shape you want.

If you ever need to clean your PEX piping, you can just hose down the surface. There’s no need to scrub away layers of dirt and grime.

Unfortunately, PEX is quite flammable, which is definitely a safety concern, as it could add fuel to a fire, increasing the pace and ferocity of the flames.

Do PEX Pipes Need To Be Insulated?

PEX pipes can withstand freezing temperatures better than other types of pipes.

However, if you want to be sure your pipes won’t freeze, you should consider installing some sort of insulation.

The truth of the matter is that if temperatures get really low, PEX piping will freeze and burst just like any other piping material.

Pipe insulation is a prudent step. Insulation protects, but it can also be an energy-efficient material.

It offers its own unique set of considerations.

Does PEX need insulation? Well, although it’s more resilient in the face of Jack Frost, yes, it does require insulation, for a number of reasons.

While PEX is flexible and less prone to cracking, PEX pipes are also more prone to contracting than other common piping materials.

Exposure to ultraviolet light can also have lasting effects on the piping, which underscores the importance of insulation.

Insulating pipes is very important because it protects them, not just from freezing, but contracting and UV too, but you’ll need to use the right material for the job.

ASTM Requirements And The Sizing For PEX

Pex piping is generally available in sizes ranging from ¼-2 inches, at lengths of 50-200 feet.

It’s important to calculate the pipe’s size with the amount of insulation that will be needed.

According to the American Standards Institute, the standard insulation for Pex piping is CTS, while the standard for copper pipes is ASTM D5.

You should use the correct type of insulation for your pipe.

Standard polyethylene insulation is used for most applications.

It meets the flexibility requirements that such material demands. Fiberglass insulation is much more rigid and wouldn’t handle such flexibility.

Materials For Insulation Of PEX

Once the right insulation material has been selected, the appropriate type of foam will need to be chosen by the user.

Polytype is better than continuous length because it is easy to install and does not require any fittings.

It is also less expensive than continuous length.

Fit For The Insulation Of PEX

In order to make sure that the foam insulation fits perfectly, you need to use an open-end fitting (OEF).

You can either remove the PEX pipe completely or cut the insulation to fit around the pipe.

Piping should be covered by insulation and pushed into place snugly. Insulation must be sealed off by removing the protective strip.

How To Insulate The PEX Tubing

You can use foam or fiberglass. Foam is easier to install than fiberglass. Clean up any spills right away.

Insulation tape should be used on the end of the foam insulation, so the tube is completely sealed.

Hot water pipes should be run inside walls instead of outside walls when possible. This prevents pipes from freezing during cold weather.

Cold weather causes water pipes to freeze, especially if they’re run outside of a building. But just being indoors isn’t enough to save them from the frosts.

If the pipes are running through a room that has no insulation itself, you’ll need to insulate the PEX.

Drain hoses and shut off outside spigots. Install frost-free sillcocks.

Exposure to sunlight damages the PEX pipe and makes it degrade faster and crack easier, thus making it prone to leaks, which is another reason to insulate external PEX pipes.

Winterize The PEX In Vacation Homes

If you’ve got a lovely summer home, if you want it to remain lovely for your next visit, you’ll need to do a spot of winterization.

Make sure all the plumbing is drained, including the toilets!

You’ll also want to insulate any exposed PEX piping that’s outdoors or in a room with no wall/roof insulation.

PEX In Basements And Even Crawl Spaces

Insulation materials should be used to keep pipes safe, but sometimes the problem is that we think our pipes are already safe.

However, as we discussed, just because PEX is indoors, doesn’t mean it’s protected from the cold.

To ensure your vulnerable internal PEX installation is protected, you can seal areas like crawl spaces and basements to keep heat inside the house.

You can use this if you need to conserve energy by keeping pipes warm.

If you’re unable to seal vulnerable areas, insulating the piping itself is essential.

PEX pipes are prone to problems because they are located in an attic space that is exposed to extreme changes in temperature.

Insulation of both sides of the hotline will help deliver hot water to your house quickly.

Insulation should be installed in tight spaces, sharp corners and elbows, and long tees. Cable ties are used to secure the insulation around tees.

Will PEX Pipes Burst If They Freeze?

The short answer… yes, PEX pipes may well burst if they freeze, and, yes, they do freeze when exposed to very low temperatures for extended periods.

Insulated Pex pipes are safe for use both outdoors and in rooms with no insulation because they can withstand freezing temperatures.

As such, these weak zones will need extra attention.

Insulation is an important step to prevent burst pipes.

Each type of insulation has a different R-value.

Fiberglass is great because it is very easy to install and has a low cost, but as we said earlier, its rigidity means it’s not a great fit for PEX.

Spray foam insulation is also great because it is quick and easy to apply and provides high R-values.

Cellulose is a natural material that is biodegradable and environmentally friendly. Insulation is used to protect pipes from freezing or bursting.

Check your insulation yearly to ensure it is still in good condition. Don’t use old insulation because it may break down as the temperature rises.

Use the right size of insulation for each type of pipe.

Cold weather causes pipes to freeze, but the question is, just how cold can it be before PEX freezes?

Well, it’s generally considered that 20 degrees F is the point of no return for PEX, so if you expect temperatures to plummet to or below this level, you need to prepare immediately.

Bring The PEX Hose Inside When It’s Too Cold

You can use Pex tubing for temporary piping systems.

To protect them from freezing, make sure you disconnect the hose when it gets cold. Store the hose in a warm place.

Installing a water monitor doesn’t just help you keep track of how much water you use, but also determines if there are any problems with your pipes.

Freeze-proof sill cocks are used to prevent freezing of the water supply line in case of an emergency or power outage.

They regulate the flow of water in your pipes. To use them, you must first remove the cap on the top end of the pipe.

Then, turn the valve handle clockwise until it stops moving. Turn the handle back counterclockwise to close the valve.

Drain the whole plumbing system of the house to prevent leftover water from freezing inside the pipes.

Do it in your vacation home or when you’re away from your home.

Turn off your main water line first before turning all of your faucets to allow the water inside pipes to drain.

Turning an indoor faucet off and on helps prevent pipes from bursting.

Can Hot And Cold PEX Be Run Side By Side?

The hot and cold PEX water lines should be installed separately.

They can be in the same area as each other, but they should never, ever touch, as it can limit the efficiency of both temperature outlets, and put unnecessary pressure on the piping material.

Not only will it keep heat transfer low, but is also flexible, which allows the expansion and contraction of the PEX pipe.

The insulation is easy to use, and it works well for almost all projects. It is great for both hot and cool pipes.

You don’t have to worry about the health risks associated with PEX piping. The material is safe for drinking water.

That makes it one of the best options available today.

Having said that, you still need to be insulating PEX.

Insulation is considered a critical aspect of the installation process, especially if the pipe is exposed to sunlight or the cold.

Overall, PEX Pipes are fantastic for your home, and as long as you’re aware of all the issues around pipes freezing and what steps to take to prevent them, they should be no bother all year round!

We hope that this article has answered your questions about PEX piping and insulation and the question of should PEX piping be insulated or not.