Why Do Copper Pipes Turn Green And How To Clean Them? 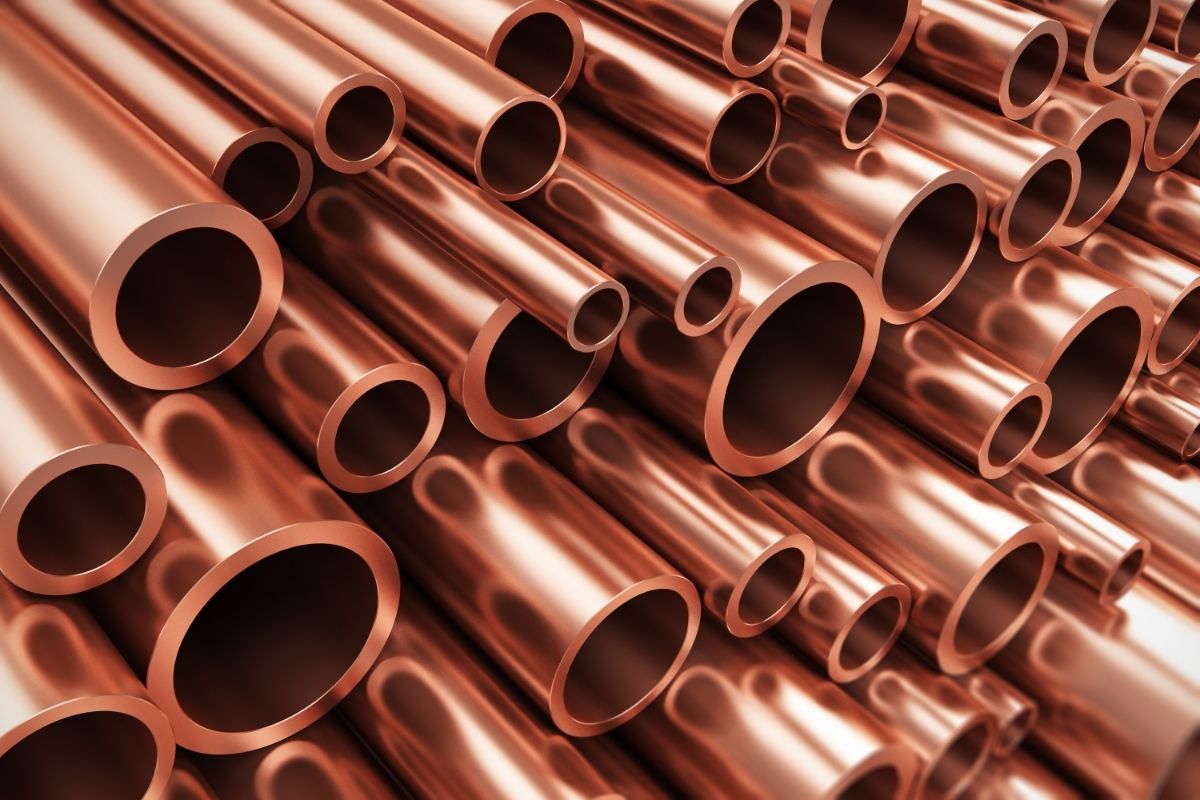 Our homes are made of various objects that are important to keeping everything working properly.

From the brickwork to electrical wiring, everything has its place in our home, even if it is not obvious what that place is at first.

So when we see objects suddenly change or not function as they are supposed to, it can cause us some alarm. Normally, this is nothing to worry about, as we can generally tell what the fault is.

However, for some things, the problem can be so bizarre or just alien to us that we don’t know what we are doing.

One of these things has to relate to copper piping. Not leaking or breaks, but a change in color.

From copper to green, in fact. This is strange and normally thought of as unsavory on a lot of items, but for copper it just seems bizarre. So, why do our copper pipes turn green, and how do we clean them?

In this article, we seek to answer this very question.

Copper is a metal with a reddish-orange color and a metallic luster under the chemical element of Cu.

Due to all these aspects, copper is seen as a great metal to use in the construction of a house as well as in a wide range of products.

For example, it is used in plumbing systems as the piping material that transports water because of its ease of use and molding abilities, its strength, and its durability.

Copper piping is also used in water transmission and distribution since it is less susceptible to bacteria and other harmful organisms than plastic or cast iron.

As well as piping for water, copper is also used for piping for natural gas and for electrical wiring.

It is also used for heat exchangers in air conditioning and refrigeration systems due to its excellent heat transfer properties.

What Is Copper Used For In The House?

Copper is a rather useful metal. It can be found in wires, pipes and cables, as well as being used in many different building materials. These are used in a few different household items.

Typically, the wiring that keeps your home running is made of copper, as is the piping for utilities that pass through the walls.

This copper piping is normally adhered with a plastic or a rubber compound on the outside that is designed to maintain the structural integrity of the copper and make sure it doesn’t conduct anything out of the piping.

However, the most common use for copper in the home is the piping for the water and drainage systems.

It is also used for the plumbing for the washing machines, sinks, showers, and toilets. In addition, there are numerous electrical wiring and wiring for the natural gas systems in the home.

While these are not generally copper, they do have elements of copper in them.

Why Is Copper Used?

We mentioned many of the best qualities of copper earlier, including the fact that copper is a very strong metal that conducts electricity well and keeps a good, steady temperature in its surroundings.

All these qualities make it ideal for use in the house and all its systems.

One of the best features of copper that we haven’t covered is that it is also resistant against corrosion.

Corrosion is basically the breakdown of metals, and we would normally associate it with rust on iron, but corrosion can take many shapes and forms.

Copper is quite resistant to corrosion, and it does not easily wear away or break, which is ideal for a home that is supposed to last years.

However, copper also has a few downsides. For one thing, it is heavy and takes up a lot of space.

The other issue is that it is expensive, which means that it is not used in houses without a good reason – having it because it is the best is not a good enough reason when you have a budget.

There are a few very good reasons why copper is used in the houses, despite its expense – most of which we mentioned earlier.

Yet, the real reason is that we just haven’t found anything that functions better when put to the same tasks. Copper is the best material for the job and until we find a better one, it will continue to be used.

Why Does Copper Turn Green?

There are several factors that may cause copper piping to turn green. The most common is the build-up of slime, or minerals, like lime scale, on the inside of the pipe.

In this case, it is not so much the copper itself turning green and more that the accumulation of material and gunk that is in the pipe turning or being green.

This build up can reduce the conductivity of the pipe, and as a result, the flow of water into the faucet.

Another cause of copper pipes turning green is due to a chemical reaction between the copper piping and the chemicals in the water or air.

When this happens, it is known as verdigris of the copper, verdigris being the green pigment that copper gains in this time.

So, there are two causes of this green pigment in copper (as well as bronze or brass).

One is acetic acid and the other is age and exposure. Acetic acid is used in a lot of products in the house and makes up about 4% of vinegar.

As such, if it is disposed of down the sink, it may come into contact with a copper pipe and change its color. Normally, the acetic acid is diluted heavily by washing, so the Verdigris takes a while to form.

The other cause – age and exposure – is just what it says, really. In this case, it is not so much causing a reaction as it is adding a layer to the copper.

See, over time as the copper is used, it comes into contact with the weather of our world or atmospheric elements.

Water, oxygen, carbon dioxide will be thrown at the copper, whether it be inside the home or outside.

While you can reduce the amount of time that copper is in contact with some of these elements, the one that mostly causes copper to turn green is oxygen, and it is everywhere.

As such, it is almost impossible to stop the oxidation process once it has begun.

The constant throwing of different elements at copper will erode it and a thin layer will form over the top of the copper called a Patina, that will change and oxidize the copper, turning it green.

This takes a lot of time to form, generally years. If you want to see it in action, look no further than the Statue of Liberty. It was once bright copper, and now it is a bright green.

It goes without saying you want no biological or bacterial activity in the pipes you drink out of, so if you think this might be the case, sort it immediately.

Should I Be Concerned If My Copper Turns Green?

Yes, you should be concerned if copper pipes in your home are turning green.

The reason why it is turning green is the same as we said earlier because there is either some type of blockage in the line causing a build-up, bacteria is accumulating, or chemicals in the water are reacting with the copper piping.

None of these you want, and all can be bad for your health.

If you are not comfortable doing the clearing yourself for a potential blockage, then contact a plumber. They are professionals who work with pipers all day, and they can help you out.

If there is no blockage in the line and the chemicals in the water are not causing a chemical reaction, then you should contact a plumber immediately to get the line cleared out and the pipes cleaned.

Bacteria can lead to some serious medical issues, including the dreaded legionella bacteria, which can lead to legionnaires disease.

How Do I Stop Copper Turning Green?

Unfortunately, there is no way to stop copper from oxidizing or turning green.

While cleaning the pipes will stop the green color if bacteria, slime, gunk, or minerals are the cause, if it is the metal itself turning green then you are plum out of luck.

When oxygen comes in contact with the copper pipes, it causes the metal to oxidize. This is normal and cannot be stopped.

One way to do this is with a water softener. Water softeners use ion exchange technology to change the water’s ions to reduce the amount of minerals that are present in the water, and this will limit the oxidation of the copper.

How Do You Clean Green Copper Pipes?

It may not get them completely clean, but it will remove some of that oxidized layer and get rid of whatever is causing it.

Another method is to make sure to run both a hot and cold water faucet for at least 30 minutes every four hours in a day.

This is so you can push out whatever is causing the problems, whether it be bacteria, oxidizing elements, chemicals, or minerals.

There are also chemicals you can use to clean your copper pipes that are specifically formulated for cleaning copper pipes.

You should always follow the directions on the bottle carefully, though, as not all of these chemicals are safe to use in confined spaces and are not good if they get on your skin.

The best solution to cleaning copper pipes is to talk to a plumber. They are professionals in terms of plumbing, and they will have all the tools necessary to deal with this situation.

Even if you plan not to use their services, having a talk with them about what you can do will help you a great deal.

Copper is one of the most useful metals in the world and has made the lives of homeowners much easier. However, that doesn’t mean it doesn’t have its own issues.

The main one is that it can turn green, and that can be a bit perturbing. Yet, if you recognize the problem and check what is causing the pipe’s new color, then you can easily rectify it or contact a professional for help.