How to Get Rid of Worms In Your Toilet For Good 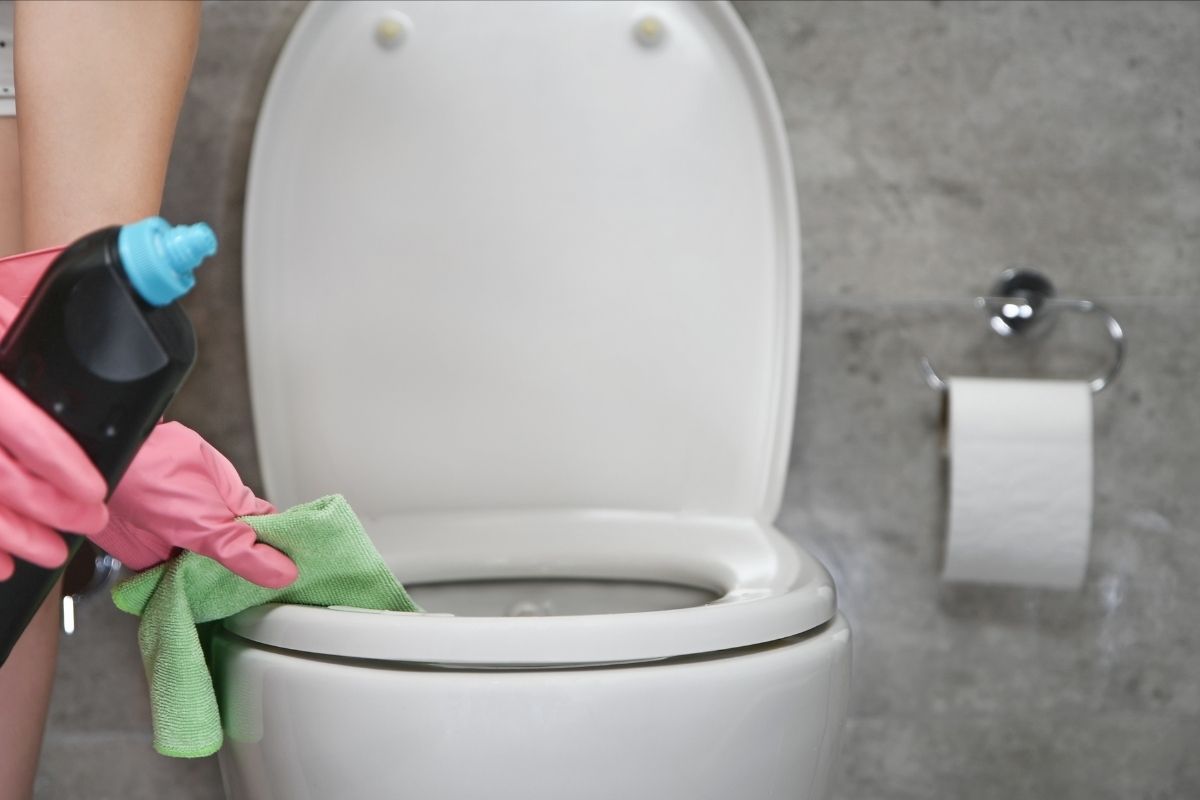 It’s the stuff of nightmares – you head to use the restroom only to find that it is infested with worms. It may sound odd, but this happens more than you may think.

It’s not something you would expect or hope to see -creepy crawlies making your bathroom their new home.

Yes, this is far from an ideal situation. As soon as you see those worms, your first thought will probably be to try and flush them away.

But, this will not get rid of them for good. Thankfully, there are ways to remove worms from your toilet.

Getting rid of worms can be pretty easy, and you can do it quickly! And, today, we are going to guide you through how to do this.

We will also discuss why worms may have set up a base in the restroom and what it means.

Read on if you want to rid your toilet of worms once and for all and prevent them from infesting it in the future.

Why Are There Worms In My Toilet?

There are a few types of worms that can appear in your toilet. While they may look ominous and unfriendly, the majority of these do not pose any kind of threat to us.

The most common types of worms that appear are:

Before we go into detail about each worm, let’s find out why they may have suddenly appeared, seemingly from nowhere. By knowing the reason, you can then prevent it from happening again.

One of the main reasons for worms in a toilet is stagnant or low-oxygenated water. In this situation, you will typically come across bloodworms.

If bloodworms are present, it’s a sign that hygiene in the bathroom needs some work.

Worms may sometimes appear because of other insects. If you have insects in the or near the toilet, worms will soon become attracted to these creepy crawlies.

Not only this but parasites live off insects such as beetles, cockroaches, crickets, and grasshoppers.

If you find horsehair worms in the toilet, there’s a good chance there is a dead bug in the bathroom somewhere, probably near the toilet.

To distinguish a horsehair worms from others, look for long but very thin bodies with an opaqueness to them.

Cracked sewage pipes are a very common reason behind worms in the restroom. These cracks create gaps, which makes it easier for earthworms to make their way through and toward your toilet.

Drain fly larvae are pretty common in toilets. If you find drain flies in your bathroom, it’s likely they have made it their breeding ground. This is because drain pipes are ideal breeding grounds for these little pests.

If you find very small, thin worms with a dark stripe on its back, then it’s probably a drain fly worm.

The good news is that you can remove all of these worms with some simple hygiene maintenance.

But, because some pests get in through cracked sewage pipes or leaks in the sewage line, more work may be required, such as grouting between the tiles and baseboard.

The Types of Worms That Make Toilets Their Home

As we mentioned, there are four main types of worms that you’re more likely to find in the toilet:

Earthworms are soil-dwelling worms that eat organic materials. They have a tubular appearance and can be found in various parts of the planet

They are completely harmless and, when outside, are hugely important to our ecosystem. Thankfully, they cannot affect people in any manner. Earthworms are thought to be extremely useful to agriculture.

They are known to transport organic produce deep into the soil, improving its overall quality.

Their excrement is also high in plant nutrients. Organic gardening would be considerably more difficult without earthworms.

Although it’s unlikely that earthworms will emerge in your bathroom, it can still occur. The presence of earthworms in the toilet usually indicates a broken sewer pipe, however.

As we pointed out earlier, earthworms can get through small cracks in sewage pipes and make their way to your bathroom. But, don’t worry, we will show you how to get rid of these particular worms below.

The Bloodworm is yet another type of worm that can be found in restrooms. The worm’s body has a brilliant red hue due to a high proportion of iron-porphyrin. It is this color that gives the little pest its name!

Bloodworms are mostly found in contaminated water, such as sewage. Thankfully, their striking color makes them easy to spot, so you can tell what type is infested in your bathroom in order to fight them off.

All in all, a bloodworm indicates two things: a problem with your water and a lack of sanitation in your toilet.

Drain flies are a typical bathroom nuisance. However, many people are unfamiliar with their larvae. Drain fly larvae have a dark strip on their dorsal region (back) and resemble tiny, slim worms.

This black stripe is actually their breathing tube. Drain fly larvae pose little threat to us.

If you find drain fly larvae in the toilet, you probably have an infestation. But, don’t think that this  an indication of poor hygiene or a filthy restroom because it isn’t! But, that doesn’t make it any better having these pests set up base in the confines of your toilet basin.

Before we describe what horsehair worms are, no, they  are not covered in hair. Thank goodness! That would be terrifying!

These little guys are primarily found in the bodies of bugs such as beetles, grasshoppers, cockroaches, and crickets. Horsehair worms are essentially parasites.

They have a long, slender body, about the thickness of horsehair (hence the name) and are easily identifiable.

After ingesting a string of eggs from a local pond or creek, they get into your toilet via the insects stated above.

They seem to have arisen out of the blue because they typically arrive in the guise of eggs in your bathrooms!  Yes, yet again, the stuff of nightmares!

How To Get Rid Of Worms From Your Toilet

Now we have identified the types of worms that may be lurking in your toilet and sewage pipes, it’s time to get rid of them, once and for all.

Let’s start by looking at the earthworm.

How To Get Rid Of Earthworms

Earthworms are uncommon in toilets. Out of the four worms, they are the least likely to pop up unexpectedly. But, if they do arrive without an invitation, you will want to get rid of them, of course.

It’s also a good idea to figure out what’s causing the problem. As we stated above, it’s probably a cracked sewage pipe.

To remove earthworms, using powdered salt works well. You can also utilize toilet lotion or even curry powder. The easiest approach to keep them at bay, however, is to seal the sewage system’s gaps.

To do this, you should call a plumber to inspect the situation and move ahead with any necessary work.

You may also have cracked tiles which need to be mended. To fix this, simply purchase some cement or tile glue and fill the gaps or cracks in yourself.

How To Get Rid Of Bloodworms

Bloodworms love to live in stagnant pools of water, such as bathtubs, sinks, and, you guessed it, toilets. If you don’t use your bathroom all that regularly, you’re more likely to find bloodworms thriving there.

Toilets provide a wonderful dwelling environment for them since they rely on organic matter.

Fortunately, pesky bloodworms are easily eradicated. The first step (and sometimes, the only step) is to thoroughly clean your toilet! Just ensure everything is spotless and disinfected.

A baking soda and vinegar combination is a good way to remove bloodworms if you don’t want to use any chemicals. This task will require the following items:

Simply fill a spraying bottle halfway with the vinegar and baking soda solution. We recommend using one third a cup of soda for every cup of vinegar to get the desired result.

Spray this solution onto the drains and any surfaces where you see bloodworms. You could also spray or even pour the solution down the toilet and then add boiling water.

This will get rid of the bloodworms and, more importantly, most, if not all, organic matter that they have been feeding off. Therefore, they shouldn’t return again.

Simply put, keeping your toilet spotless is the best method of keeping these pests away. They do not like clean water. In fact, they won’t survive in it. Good hygiene always comes out on top!

How To Get Rid Of Drainfly Worms

However, you could find some making a life for themselves in your toilet. If you encounter drain flies, you almost certainly have an issue with their larvae.

You’ll need the following items to investigate the problematic area and to eliminate the drain flies and its larvae:

Discovering where drain flies originate from should always be the first port of call. Using adhesive tape is the quickest method to do this.

Make sure the sticky side is facing down and stick it to the drain’s top. Simply leave it sit overnight or for 12 hours or so. The drain flies will try to flee the drain at some point, but, instead of freedom, they will become trapped on the tape.

If you find drain flies stuck to the tape, there’s a good chance that their larvae are also in the drain too.

Once you have the flies stuck to the tape, it’s time to eliminate any drain fly larvae left that have taken up residence in the drain. This can be achieved with certain chemical cleaning materials, but this isn’t always necessary.

The simplest and most ideal approach would be to start with natural solutions.

Mix a cup of vinegar with half a cup of baking soda, and half a cup of salt. Stir this solution and then pour it down the drain and let it sit overnight.

This concoction is highly toxic to the larvae and is almost surely to kill them off. By adding additional boiling water, this should cure your drain or toilet of the pests once and for all.

We recommend repeating the process a few days later to make sure everything has been killed off.

How To Get Rid Of Horsehair Worms

Horsehair worms can be treated similarly to earthworms and bloodworms.

Once you’ve determined that they have contaminated your restroom, sprinkle it with a  vinegar and baking soda solution. Then, clear the bathroom and spray the mixture everywhere if you fear they’re still around.

This will poison all the eggs and stop the worms from hatching.

No one wants to find worms in their bathroom but, if you do, follow our processes above, and you should be able to get rid of them for good. 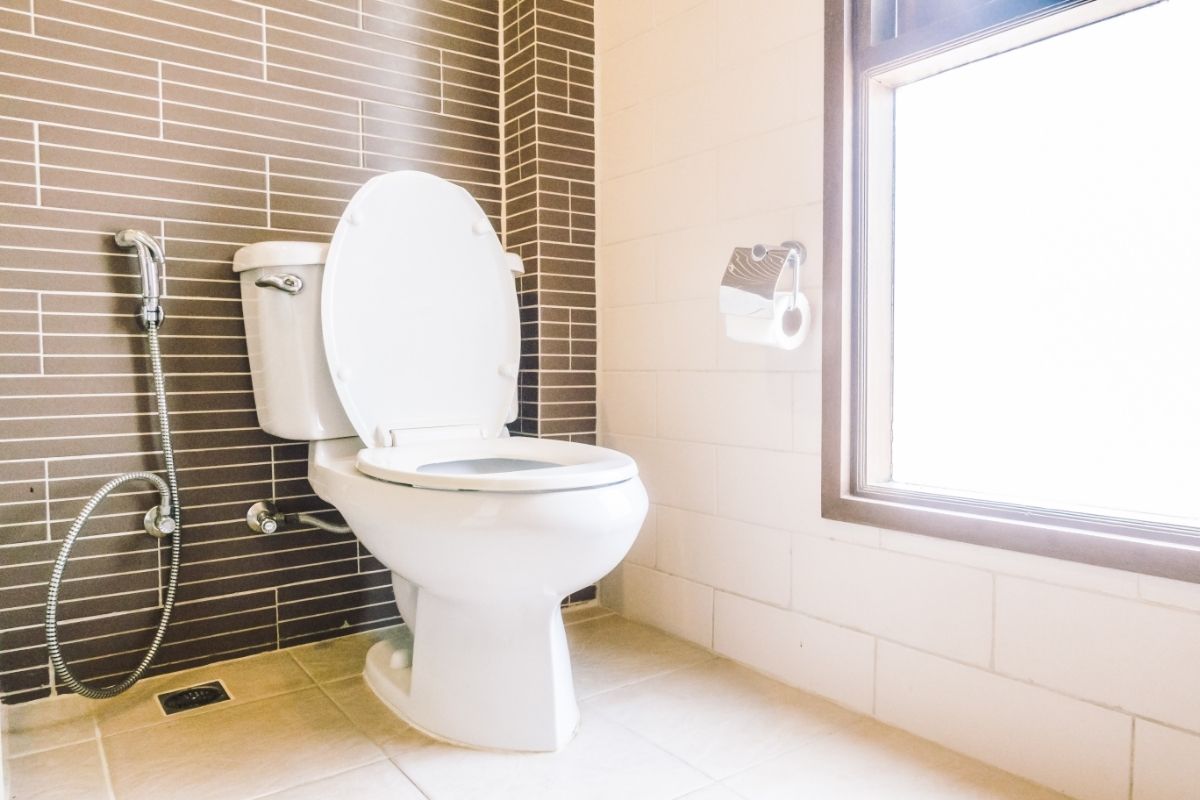 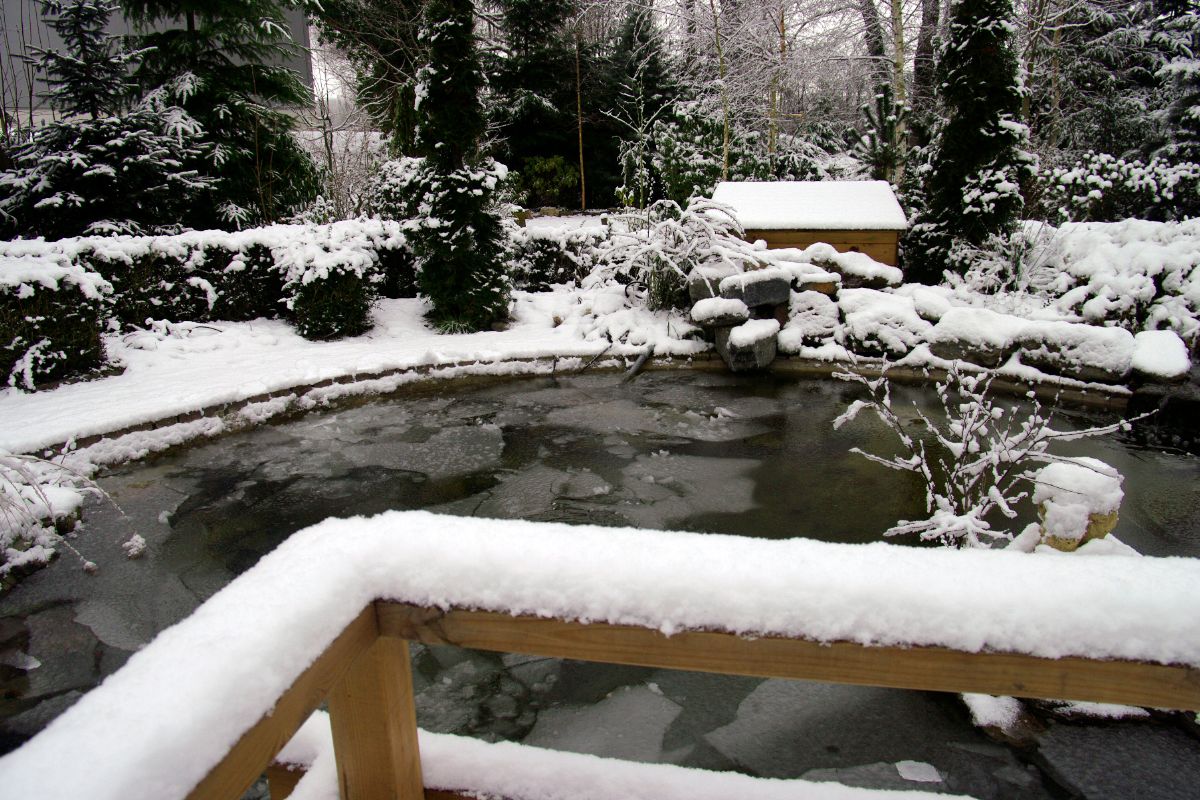 How To Heat A Pond In Winter (With And Without Electricity) 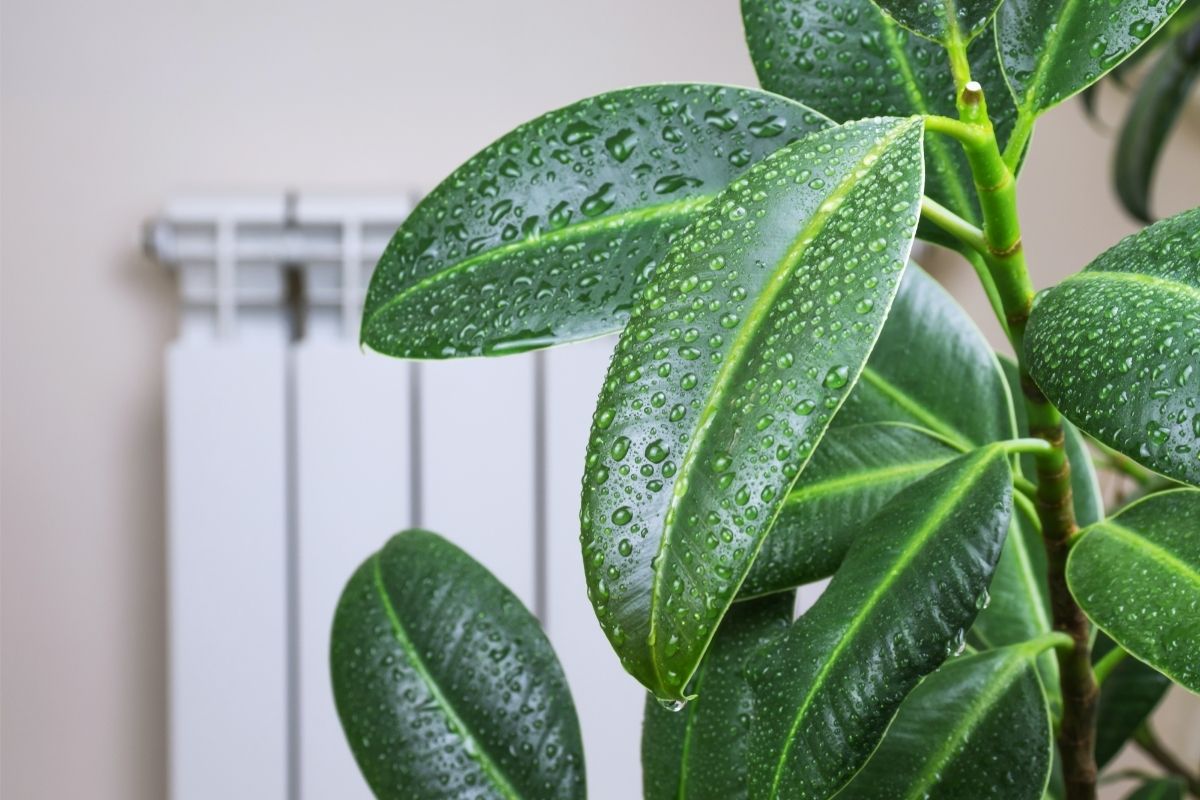