4 Different Types of PVC Pipes And What To Use Them For? 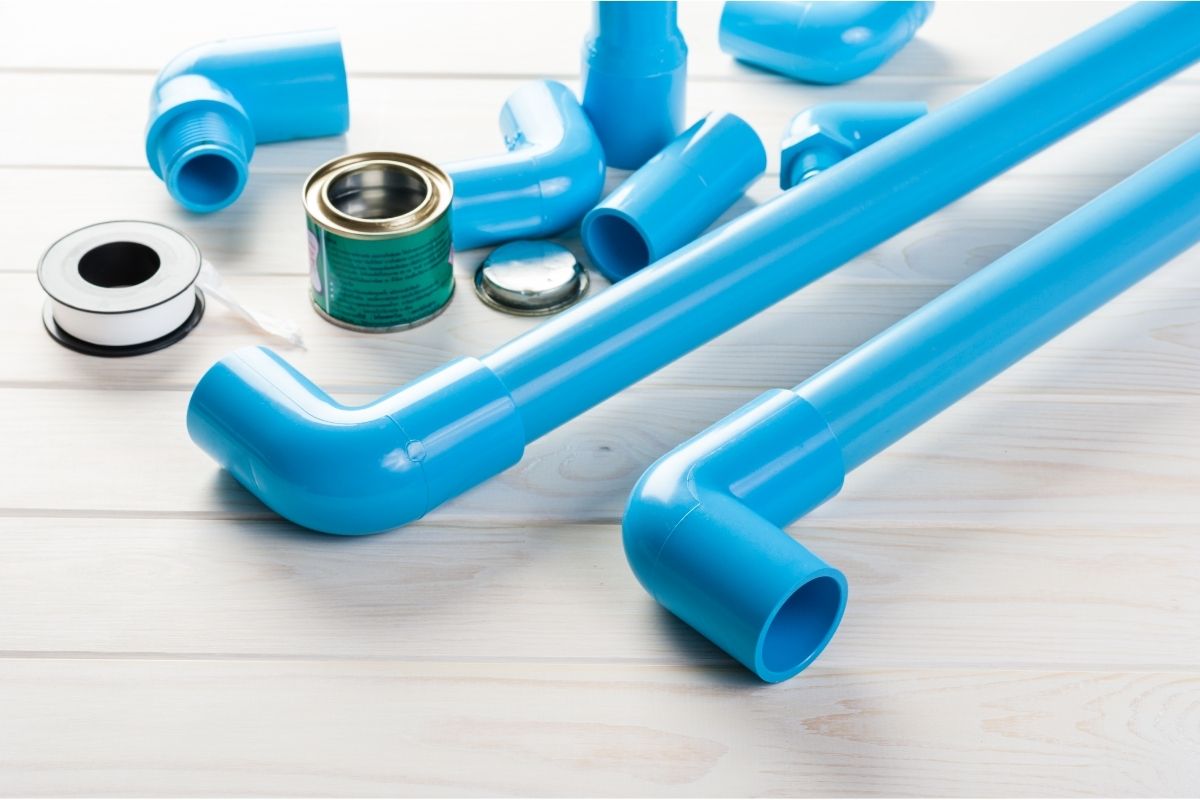 Plumping is essential in life, our houses wouldn’t run without it. If you want running water or a flushing toilet, it’s going to be crucial that you have pipes running through your house.

But what are the pipes made of? And what different kinds can you get?

Well, we’ve got the answers for you! The most commonly used type of pipe is made from PVC, but there are a few varieties of PVC pipes available on the market.

In the guide below, we’re going to break them down, looking at each of their benefits and uses.

What Is A PVC Pipe?

As we’ve said, PVC pipes are the most popular make of piping that’s available to plumbers and DIY fans.

They are made of PVC, which stands for polyvinyl chloride. What are the qualities of this material? Why is it such a good fit for study pipes?

The answer lies with their durability, because they’re a high-quality and impressive material that is able to put up with all the water pressure that will be running through them, all without cracking and causing leaks. Think about it, a leaky pipe spraying liquid is the last thing you want in a house!

Pipes have also been made of copper, but they’re much harder to fix when they spring a leak. PVC, on the other hand, is much easier to get back to working conditions.

On top of that, PVC is recyclable too, which makes their production good for the environment – whenever a PVC pipe is no longer usable, it can simply be recycled and turned into a new one. No waste!

What Types Of PVC Pipes Are There?

There are four varieties of PVC pipe available. They are:

Each of these are popular, and all are chosen for their individual benefits and qualities. They come in different sizes and shapes, though they share a lot of aspects: recyclability, durability, safety, and so on.

Below, we’re going to go into each type in detail, and tell you what each one brings to the table.

This type of PVC pipe has a high content of chlorine, as you can tell from their name. They were first used in the 1960s, but have improved over time.

To make them, some PVC resin is chlorinated, which means that it’s combined with chlorine or chlorine compound. They aren’t just chlorine, though, because lots of other things are added to them.

For one, lubricants are added, helping the liquid to flow. On top of that, impact modifiers are added too, as well as pigments and stabilizers.

Chlorinate PVC pipes are used for a number of different things. For example, they are popular for:

Chlorinated PVC pipes are very resistant to corroding, as well as being very safe for carrying drinking water. There shouldn’t be a risk of something toxic getting into the drinking supply when these pipes are used (see below).

On top of that, the material is very durable, largely due to the addition of impact modifiers – meaning that they can withstand more impacts.

It isn’t just that they are strong, though. Chlorinated PVC pipes are also resistant to lots of different temperatures, so it’s able to carry liquids that are going to be hotter or colder, without breaking.

For this reason, they are popularly used for sewer systems, whether it’s in commercial building situations or residential areas.

You may think that increased strength and endurance would mean that the material isn’t flexible, but that’s not the case.

Thanks to the plasticizers that have been added to it, chlorinated PVC is flexible and can be shaped in a range of ways, if you want. Unplasticized PVC,which we’ll go into next, is much less flexible.

On top of all of this, chlorinated PVC is highly recyclable, so there’s no waste of the earth’s resources.

Does The Chlorinate Affect The Drinking Water Quality?

You may worry that chlorinating the pipes will affect the drinking water that they carry, and fear you’ll be drinking something like swimming pool water.

Don’t worry! Though chlorine can change the odor and taste of water, it doesn’t change its safety or quality.

In fact, water is usually chlorinated before it comes out of your faucets. So chlorinated PVC pipes will be more than safe!

As you can tell from its name, unplasticized PVC is a material that has been made without a plasticizer. Basically, this means that it’s not going to be very flexible, because plasticizers are added to make materials more shapeable and flexible.

Not only do they do this, but they reduce the viscosity of the material (its resistance to movement) and as well as lessening the friction.

These all make a material that bends and shapes, which is not Unplasticized PVC. There’s a reason that they also call it “Rigid PVC”!

That being said, unplasticized PVC is still popular as a material for making pipes that will be used for a variety of things. For example:

Despite their rigidity, there are plenty of reasons to use unplasticized PVC for making a pipe. Their heaviness is one reason, or rather their lack of it!

It’s a lightweight material that’s easy to fix and carry, making it easier to install the pipes and connect them to each other.

Additionally, they have a very strong mechanical performance. These all combine to make them very durable pipes, meaning that they will be good for carrying strong and sizable loads.

Plus, they are cheap! Whether it’s due to its lightweight nature or perhaps its lack of flexibility, the material and the pipes are cheap.

This makes them a good fit for carrying something like drinking water, because that naturally requires a lot of pipes – because there’s a lot of people who need water!

Also, like all PVC, they are recyclable. Therefore, they’re a great choice for sewage, which needs a lot of hardy pipes that won’t be wasted once they’re used.

These are slightly more complex, with molecularly oriented PVC pipes being made by changing the amorphous unplasticized PVC scientific structure into a format with many more layers.

Essentially, it’s a molecularly improved version of the unplasticized PVC!

People use this scientifically impressive form of PVC for a number of things. For example:

These pipes are better than unplasticized PVC pipes in a number of different ways. For one, they are easier to recycle, leading to more frequent recycling and reusing of them.

On top of that, they are also more resistant to corrosion, meaning that they are less likely to wear down and need replacing.

This, along with many other features, makes them very cost-effective, because you don’t have to invest in changing them regularly. They’re an investment.

They can withstand it, because they are built to put up with a high pressure of substances traveling through them. It is a very ductile material, meaning that it can put up with a lot of stress without deforming.

They are unlikely to fatigue and form cracks. What can we say? They’re strong! They have a wonderful balance of strength, stiffness, and flexibility.

Plus, they have an impressive hydraulic capacity. This refers to it being able to have or go beyond a given flow rate of liquid going through it.

These are the newest created variety of PVC pipes, so may have to catch up with the others in terms of popularity. That said, they have plenty of benefits!

Put simply, they are made by putting a variety of different chemicals into unplasticized PVC, which increases their resistance to stresses and impacts.

Just like molecularly oriented PVC, they are a scientifically modified version of unplasticized PVC!

A lot of scientific combinations and experiments have gone into getting PVCs to the quality they are today. Normal, original PVC was good, but didn’t have the stability that is often needed from it.

As a result, scientists alloyed the original PVC with polycarbonate, forming an alloy composition that had much more dimensional stability.

This was especially true when the modified PVC was being hit with extra pressure or heat.

So, the final product was a really strong thermoplastic resin composition with many new, much better qualities.

For example, it had the high-impact strength that meant it could put up with more stresses and impacts.

Additionally, it had a high resistance to thermal distortion, which means that it could withstand a lot of heat without getting deforme and misshapen.

The resin composition often has polycarbonate and an alloy of some vinyl chloride resin contained within it.

When scientists made different compositions on the side, they had butadiene-modified acrylic and ethylene-vinyl within them.

Those are all very complicated and scientific, but the thing you need to take from it is that both of those compositos ended up being very rigid, which was what they wanted.

The types of PVC pipe can be categorized in “Schedules” of different numbers.

These numbers will tell you differences in aspects like strength and weight, as well as inside and outside diameter. On top of that, their prices are different too.

What are the differences? We’ve made a table to tell you!

Which PVC and Schedule Should You Use?

It all depends on whatever you’re going to be using the pipes for. Look at all the differences that each brings, and pick the one that ticks the most boxes for what you need!

And there you have it! There are a good few types of PVC that are used for piping, but each one has their benefits.

This guide has broken them all down for you, leaving you able to better pick whichever type is going to be best for you!