How To Stop An Overflowing Toilet: Do’s And Don’ts 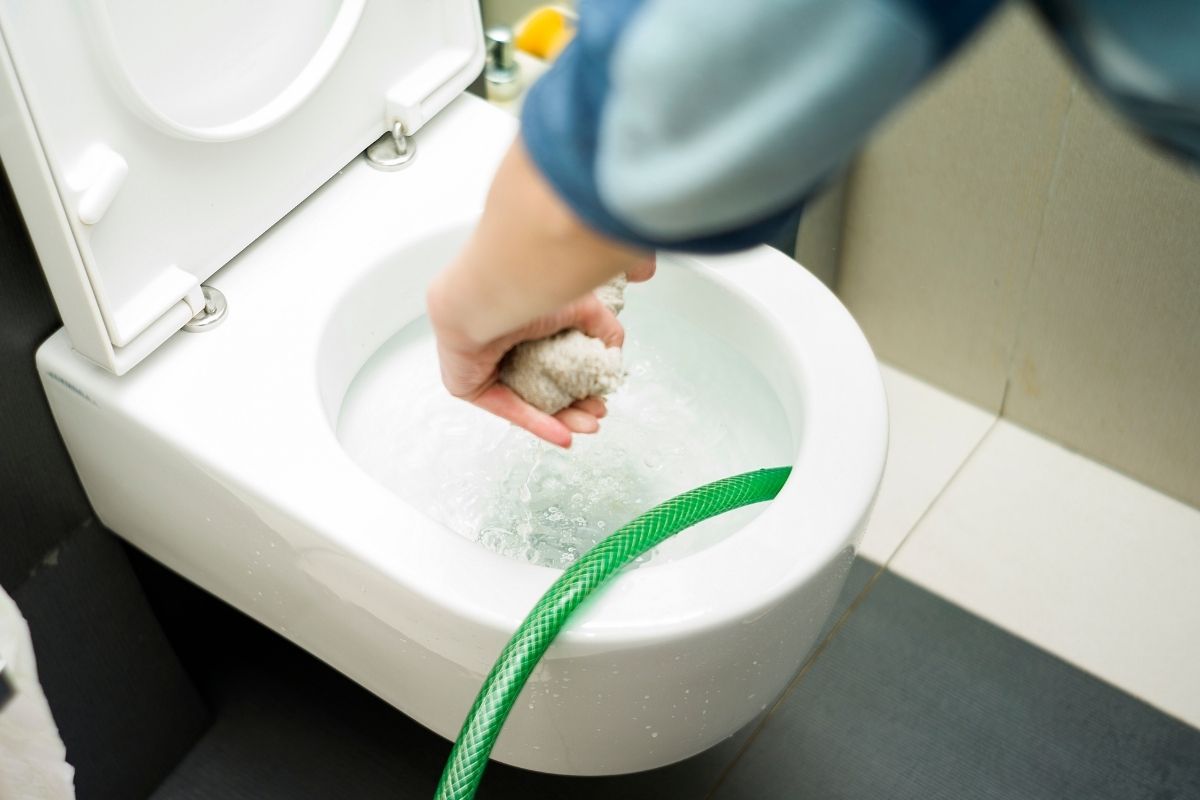 Everyone has experienced an overflowing toilet before.

It’s a nightmare, and when you’re unsure how to fix an overflowing toilet, it can be a daunting prospect.

After all, nobody wants to make an overflowing toilet worse.

Not only is it unhygienic, but there’s the risk of damaging the toilet itself, as well as the possibility of water damage if the amount of water leaked is excessive.

But what do you actually need to know about fixing an overflowing toilet?

And more importantly, what are some things that you should never try?

In this helpful guide, we explain the Dos and Don’ts of fixing an overflowing toilet (see also ‘How To Fix A Toilet Backing Up Into A Bath/Shower‘).

So, if your toilet is being a menace and overflowing, and you’re unsure how to solve it — continue reading!

What To Do To Fix An Overflowing Toilet

In the event that a toilet is overflowing, follow the below steps to solve the problem.

This should prevent any water from entering the tank of the toilet, which will stop the toilet from overflowing.

The first step involves removing the lid from the toilet tank.

In the tank, there should be a fill valve, or float, which will be located at the bottom of the tank.

The valve needs to be turned, and that will prevent any water supply from entering the water tank of the toilet.

The home’s main water supply needs to be immediately shut off. This should ensure that no water will enter the toilet’s water tank.

In some cases, the toilet may still overflow. This suggests that there is a serious issue with the sewerage system. In such a situation, a plumber needs to assess the situation.

If the issue is linked to the sewerage system, it is likely that the drain needs to be cleared, which will prevent the toilet from overflowing.

However, only a plumber can correctly assess the issue.

Tips On Prevent An Overflowing Toilet

An overflowing toilet is nothing to be embarrassed about. It happens to every single household, at least once.

There are dozens of reasons why a toilet can overflow, and sometimes — nobody is to blame.

Below, we have created a series of tips that prevent an overflowing toilet from reoccurring.

While this suggestion is obvious, it’s always a good reminder to ensure that the toilet is cleaned on a regular basis. Bleach should be used to clean toilets, to ensure that there is no harmful bacteria present.

Other great options are vinegar, as well as baking powder. It’s vital that the toilet stays clean, as this will ensure that the system within the toilet itself stays proactive.

Inspect The Toilet Every 6 Months

It’s unfeasible for most people to inspect their toilet every single week, but inspecting a toilet every couple of months, or even 6 months at a minimum, will ensure that any possible signs of damage are spotted early.

Ensure that all the components inside the tank look like they are functioning well and that they are not damaged.

If there seems to be buildup inside the tank, then clean the tank.

When inspecting a toilet, it’s critical that any leaks or cracks are paid attention to. Many people do not immediately realize when their toilet starts leaking.

That’s because toilets can leak from the base of the toilet, and the amount of water leaked may not be startling at first.

That’s why it’s a good idea to inspect the toilet every couple of months for any damage.

Be Wary Of The Type Of Toilet Paper Used

There are tons of toilet paper on the market.

The issue is, that not all toilet paper reacts the same way.

The toilet paper, which is made out of thicker paper, and is designed to be extra soft, isn’t actually that great for the toilet.

That’s because the septic system can struggle to break down this type of toilet paper.

It means that instead of the toilet paper breaking down, it can clog the pipes. This can cause a lot of damage and can cause a toilet to overflow.

Use A Plunger (After The Water Stops Overflowing)

A plunger can be very effective, but only when the water has stopped flowing.

Plungers work by creating an airtight seal and cause the pipes to increase the amount of pressure that is stored.

When the plunger is removed, the pressure is reduced, which can cause water to rise, and remove the blockage.

The issue is, if the toilet is overflowing, then using a plunger can cause tons of water to stain the floor, and it can damage the pipes.

Plus, a plunger isn’t going to be effective in this situation, because the aim is to prevent the water from overflowing, and then remove the blockage.

What NOT To Do, To Fix An Overflowing Toilet

It’s important to explain what somebody should not do, to fix their toilet.

That’s because while something might appear effective, in reality, it can make the situation a lot worse.

When a toilet is already overflowing, it’s best to not do any actions which could worsen the situation.

Below, we explain actions that should not be taken when a toilet is overflowing!

Flushing the toilet may seem logical. After all, if you flush the toilet, then the problem with the toilet will go away.

However, flushing the toilet does nothing other than add more water to an overflowing toilet.

Some people may even be inclined to flush the toilet multiple times, in hopes that the water pressure will remove the blockage.

This again is a mistake, and will likely only result in a worsening situation.

Don’t Put Chemicals Into The Toilet

While it’s important to clean the toilet, it’s not the best time to spring clean the bathroom, while the toilet is over flowering.

Do not add any bleach, chemicals, vinegar, or baking soda into the toilet.

This will make the situation much worse and can make it dangerous for you, as the water will irritate the skin.

The chemicals will not help the blockage, but they may make the situation worse, by causing a chemical reaction, which can make the toilet overflow.

People tend to greatly underestimate the danger of using chemicals in a toilet that is overflowing.

It is true that the chemicals will cause a reaction, and that some blockages may dissolve — definitely not all of it, during the course of a couple of hours.

However, this process will generate a huge amount of heat.

The heat produced can cause extensive damage to the toilet, by cracking the porcelain — and even worse, it can totally damage the pipes.

Don’t Use Homemade Tools To Unclog The Toilet

Not everyone owns a plunger, although, after a toilet flooding, most people tend to go out and buy one (lesson learned!).

That means you’ve now got two blockages, and then the toilet is going to be much worse, and more difficult to fix.

Don’t Try to Leave The Toilet To Fix Itself

While hoping for the best is reasonable, it’s not a good idea to leave the toilet itself.

If you cannot solve the problem yourself, then you should call a plumber.

A plumber will be able to fix the problem and get the toilet functioning normally again.

Hopefully, the advice in the article should stop your toilet from overflowing.

If the toilet does not stop overflowing, or there is still a block in the toilet, then contact a plumber.

A plumber will be able to fix the problem for you.